Bucks Fans! Our friends at North Gateway Tire Co. are proud to sponsor the Athlete of the Season – featuring the winter season’s Athlete of the Month honorees.

We’ve loved the support you’ve shown your Bucks athletes over the winter sports months. And now, more than ever, we’re excited to champion these hard-working student-athletes.

The athlete voted most hard-working by the community will receive a Visa gift card and special winners certificate from North Gateway Tire Co. Click here to VOTE!

Nominated from Buckeye for the Winter Athlete of the Season:

DANNY FLOOD – VARSITY BASKETBALL – BUCKEYE
Danny has had impressive showing this season, hitting his stride and scoring 22, 27, and 34 points, respectively in 3 consecutive games.

MADISON ROSS – VARSITY BASKETBALL – BUCKEYE
Madison did an outstanding job leading the team this year. The senior captain was averaging 13.1 points per game and had games of 22 and 27 points this season. She is able to play inside and outside with tremendous versatility and was our ‘go-to’ player when we need scoring. She can handle the ball as a point guard as well. On the defensive end she is creates difficulties for teams as she can guard all types of players at any time.

AURORA YAGER – VARSITY GYMNASTICS – BUCKEYE
Aurora has competed as a varsity gymnast all 4 years of HS and has improved tremendously. She comes to practice everyday with a positive attitude, respect for her coaches & teammates and ready to work hard. She is a 4 year letter winner in gymnastics.

PAT MIDEA – VARSITY BASKETBALL – BUCKEYE
Pat made six threes in a game against Padua. His leadership and play helped us become more competitive later in the season. 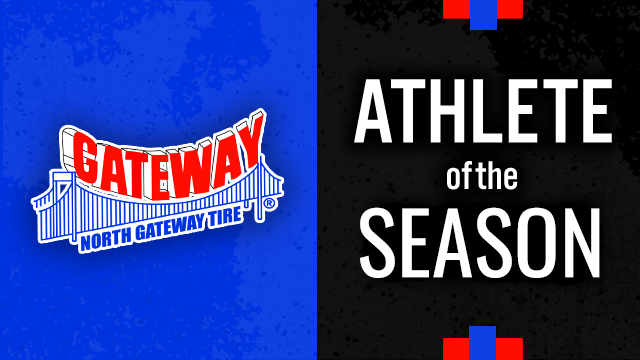 ALAYNA TESSENA – VARSITY VOLLEYBALL – HIGHLAND
Alayna had a great season for the Hornets. She put up 259 Kills and 50 Aces on the season. Congratulations, Alayna!

KENDALL MCCORMICK – VARSITY BASKETBALL – HIGHLAND
Kendall led the Girls Basketball Team to a solid record by performing at a high Level. One of the best players in the area she is avg 15.3 ppg, 5.0 Rebs, 4.0 assists and 4.0 steals a game for the Hornets. As the captain of the team she has provided great leadership that has contributed to the team being successful

COLLEEN JOHNSON – VARSITY GYMNASTICS – MEDINA
Colleen had a great freshman season thus far. She won the all around and uneven bars in her high school debut and has been a solid all around gymnast since then. At this week’s GCC Championship meet, Colleen finished second in the all around, second on beam, and third on vault earning herself All-Conference honors on bars, beam, and all around.
ALLY KOVACH – VARSITY BOWLING – BRUNSWICK
Ally had a fantastic season. At the St. Ignatius Wildcat Classic, Ally placed on the All-Tournament Team bowling a 513 series. She also helped carry her team as the anchor bowler to their 4th place finish.

TORI SMITH – VARSITY BASKETBALL – CLOVERLEAF
Tori Smith had an awesome season for the Colts. She accomplished her career-high in scoring versus Ravenna this season. She scored 23 points for Cloverleaf with 18 rebounds, 5 steals, 4 blocks, and 2 assists.

BRYCE PROFITT – VARSITY BASKETBALL – HIGHLAND
Bryce put up great numbers for the men’s Hornets squad this season; through 3 games he averaged 26.7 points per game, 9 rebounds per game and 3 assists per game.

DYLAN ESTERLE – VARSITY BOWLING – HIGHLAND
Dylan was a top bowler for the Hornets team this season.

JAMES SCAVUZZO – VARSITY WRESTLING – HIGHLAND
James has gone an impressive 5-0 in last two competitions, and is 33-3 overall on the season.

TREVOR MACKEY – VARSITY BASKETBALL – BRUNSWICK
Versus Highland High School, Trevor had 17 points, 6 rebounds, 3 assists, and 2 steals. He was 3-4 from three. Trevor helped lead his team to victory as Brunswick beat Highland 61-55. He had an all around great season for the Blue Devils.

DOMINICK BOTTONI – VARSITY SWIMMING – MEDINA
Dominick had an outstanding season for the Bees. He accomplished 10 wins through just first 4 meets of the season.

*Unique email addresses are permitted to vote up to 10 times per athlete to be counted.