And congratulations to Syndey Bell who was nominated from Buckeye HS. Go Bucks! 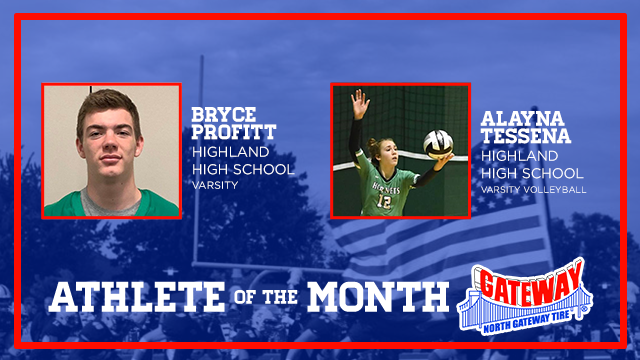 Bryce Profitt – Basketball – Highland HS
Bryce is putting up great numbers for the men’s Hornets squad this season; through 3 games he is averaging 26.7 points per game, 9 rebounds per game and 3 assists per game.

Female Nominees:
Ally Kovach – Bowling – Brunswick HS
This past weekend at the St. Ignatius Wildcat Classic Ally placed on the All-Tournament Team bowling a 513 series. She also helped carry her team as the anchor bowler to their 4th place finish.
Lindsey Linard – Basketball – Medina HS
Lindsey is averaging career-high’s of 12 points, 10 rebounds, 4 blocks per game in the first 6 games of the season. She helped lead the Lady Bees’ Basketball team to a 6-0 start, 5-0 in the GCC. Lindsey had career-highs this season with 23 points and 16 rebounds against Elyria, and finished with 10 blocks against Euclid.
Morgan Vogel – Swimming – Medina HS
As a freshman, Morgan has 9 wins through the first 4 meets this season and set a Medina High School record in the 100 Butterfly!
Sydney Bell – Basketball – Buckeye HS
Sydney has started the Bucks’ season off strong, averaging 7 RB and 8 Points per game after a 22 Point effort versus Fairview. She has begun to show dominance as a scorer and rebounder.

Male Nominees:
Brody Stalling – Wrestling – Cloverleaf HS
Senior Brody Stalling won his 100th career match on his way to winning titles at the Lorain Titan Classic and Mike Lewis Invitational Tournament!
Dominick Bottoni – Swimming – Medina HS
Senior Domincik Bottoni has 10 wins through the first 4 meets of the season.
Kyle Szumski – Basketball – Medina HS
In the month of December (first 5 games), Kyle has averaged 15 points per game, 5 rebounds per game, and 3.5 steals per game. The team is off to a 5 – 0 start.
Trevor Mackey – Basketball – Brunswick HS
This past weekend vs. Highland High School, Trevor had 17 points, 6 rebounds, 3 assists, and 2 steals. He was 3-4 from three. Trevor helped lead his team to victory as Brunswick beat Highland 61-55.