The flash of a tail, the shimmer of scales. Mermaids are the secret creatures of the deep that have evaded the capture of men throughout history. They lure sailors to a watery grave one day then famously fall in love with Prince Eric the next. Almost every coastal culture has regarded them with fascination and wonder.

Buckeye High School has accomplished the impossible: captured one of these mythical creatures. It walks the halls, frequents the classes, and shares the air with the other unsuspecting students. Never have any questioned its humanity until now.

It is Sarah Turner.

She hides her dual nature well, but she cannot resist the pull of the water. She became Buckeye High School’s only swimmer. She’s making a splash in pools across northeastern Ohio.

“The best part of being Buckeye’s only swimmer is having all the school records,” Turner said.

To make these records, Turner undergoes intense training. Though it is not required to alter her diet, Turner does try to eat healthier, especially before big meets. She has other mermaid secrets to improve performance as well.

“I’m supposed to go all swim season without shaving my legs because it creates drag,” Turner said. “Then at districts you shave, and it takes three seconds off your time.” 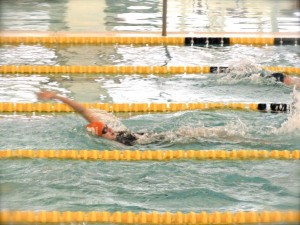